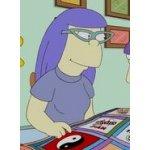 I want to support underdog characters like Sam and Larry (The barflies), Richard, Lewis, Wendell, Charlie, and Just Stamp the Ticket Man. I want these characters to speak more. I also want Jerri (Sherri and Terri's mother) to speak more. Richard and Lewis' parts decreased as Bart spent more time with Milhouse and Nelson became a friend of Bart instead of an enemy. Please support and try to support those characters!

Retrieved from "https://simpsons.fandom.com/wiki/User:Tyreek10?oldid=915380"
Community content is available under CC-BY-SA unless otherwise noted.