Wall E. Weasel's is a family entertainment restaurant located in downtown Springfield. Its slogan is "We cram fun down your throat."

Wall E. Weasel's specialty is food and entertainment geared towards children. The restaurant's amusements consist of video games (including "Larry the Looter," which Bart played, and "Touch of Death"), Skee ball (which Nelson cheated at by walking up the alley and dropping the balls into the center target by hand), a basketball game, a ball pit, and a Whac-A-Mole-style game called "Whack-A-Weasel."

The restaurant has a band of life-sized poorly-maintained animatronic puppets which perform for children who are celebrating their birthdays. One of the puppets is Wal E. Weasel, and the animatronic bandleader is Signor Beaverotti.

Bart had a birthday party there. Wal E. Weasel also appears in the restaurant as a costumed mascot. At Bart's birthday party, he was seen serving pizzas to partygoers and coming to the rescue with a fire extinguisher when Signor Beaverotti caught on fire. 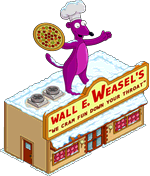 Add a photo to this gallery
Retrieved from "https://simpsons.fandom.com/wiki/Wall_E._Weasel%27s?oldid=787507"
Community content is available under CC-BY-SA unless otherwise noted.