House of the Dragon Trailer - The Loop

Bart and LisaHey! Turn that back on!

Watching Television is the second Simpsons Short that aired on The Tracey Ullman Show on May 3, 1987.

This Simpsons short opens with some diegetic sounds from the television before Bart and Lisa begin to fight in a very cartoon style during the commercial break. Maggie arrives and the two began to argue about her for changing the channel before Maggie apologetically moves back to her original place. Bart and Lisa resume fighting, before Maggie exits. Once again, Lisa and Bart are watching a program, in which Lisa does not approve of when they have a long drawn out argument. The theme to The Tracey Ullman Show starts playing, but Bart finds this unsatisfactory and Maggie once again changes the channel. Another argument ensues before the start of the next scene, where Homer and Marge have joined the children on the couch. Homer talks to fill the gap within the commercial before being told to stop by Bart when the commercial break draws to a close. 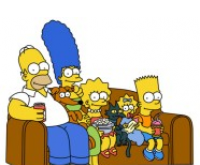