In a parody of the Breaking Bad opening, lots of letters appear and arrange themselves to say "The Simpsons"

In a parody of the Breaking Bad opening, Marge bakes cupcakes and Homer comes along and take some of the mixture. She puts the cupcakes in the oven and they rise. She then has a bake sale. Milhouse takes one and we see Homer watching through binoculars. We then see Walter White and Jesse Pinkman watching the couch gag on TV.

"What Animated Women Want" is the seventeenth episode of Season 24.

After watching A Streetcar Named Desire, Milhouse takes on a Marlon Brando-inspired bad-boy persona to attract Lisa. Milhouse seeks then advice from the school counselor. Homer tries to save his marriage by becoming a better man and fulfilling old promises when Marge becomes washed up with his behavior, and he seeks advice from his local sushi chef.

Homer and Marge have organized a lunch date at the Swanky Fish. While there Marge is excited to be able to have 'grown up people' conversations as the kids are not with them. When trying to spark a conversation, Homer does not seem interested and is only focused on eating the food. Enraged, Marge storms out of the restaurant and hails a taxi for home. Worried about their marriage, Homer tries to fix his problems with Marge. He takes out a to-do list from within his wallet that Marge had given him. He finishes the list and shows Marge; she is disappointed in him because the list was from six years earlier.

Homer returns to the Japanese restaurant they went to previously in the episode and is given relationship advice by the head chef. Homer takes some food from the restaurant back home and offers it to Marge; she is almost impressed but is again unhappy at him when Homer begins to eat the food himself. Unsure of what to do, Homer goes to Moe's Tavern and talks to Moe about his marriage problems. Moe suggests winning her back by exciting her with sex. As a result, Homer goes to the local sex shop where he purchases an array of different sex toys and machines.

When he shows Marge all that he has bought she is confused and unimpressed. Homer sits down on one of the machines by mistake and is injured by it. He is taken to the hospital and while he is being treated they reconcile. Afterwards, in their backyard, they set all the sex items on fire and Marge admits that she was too hard on him as she says that no matter what he will try to make matters right.

Meanwhile, Milhouse is sitting with Bart in the Springfield Elementary School cafeteria. He looks at Lisa and hopes that she will come up to him. She begins to approach him and he becomes excited, but she has only come to the table to tell Bart that Marge had mixed up their lunches. She asks Milhouse if she can eat his cupcake. Having just seen A Streetcar Named Desire for a class assignment, he takes on the personality of Marlon Brando. Thus, he chooses to be rude and dismissive towards her, refusing her request to eat his cupcake. This causes him to win Lisa's respect.

Confused as to why his new tactic works, he continues this to keep Lisa interested in him. Seeking answers as to if it is okay to pretend to be someone he isn't, he approaches the school counselor (Wanda Sykes). Before she can give him an answer she receives a call notifying her she's been fired. Shocked, she tells Milhouse that he should continue pretending to be who he isn't, because his regular personality is boring. Feeling as though he is betraying his character he throws cupcakes (the same from earlier in the episode) at Lisa's window. He apologizes for pretending to be someone he isn't and they are happier.

Robert David Sullivan of The A.V. Club gave the episode a C+, saying "This is a scattershot episode with a lot of pop-culture references but little comic momentum."

Teresa Lopez of TV Fanatic gave the episode three and a half stars out of five, saying "Despite the hilarious sight gags and funny The Simpsons' quotes, I felt humor of the episode was undercut by the odd narration. It seemed unnecessary as framing device as it didn't really add anything to the story." Rob H. Dawson of TV Equals said "The sushi restaurant portion of “What Animated Women Want” felt lazy too, mixing together Asian stereotypes and some vague notion of rude fancy restaurants into a less-than-hilarious mess, the only highlight being the alternate universe in which anime pieces of sushi go on an adventure in Santa's Little Helper’s intestines, which I actually liked, one piece of something fun in the middle of an otherwise lackluster The Simpsons." 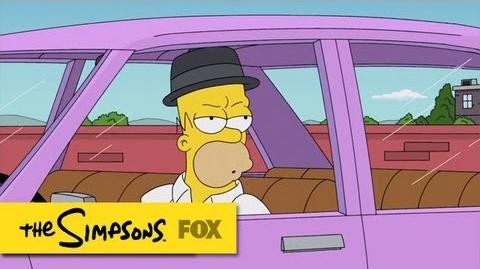