Professor Frink flies by on a jet pack.

The Simpsons are sculpted in ice sitting on the couch.

Sonny Rollins (as himself)

Whiskey Business is the nineteenth episode of season 24.

Moe finds a new lease on life when rich venture capitalists take an interest in his homemade whiskey. Then, Grampa injures himself while babysitting Bart, and quickly discovers he prefers being cared for by his grandson than the staff at the nursing home. Also, Lisa takes exception to a "Tupac-at-Coachella"-style hologram of jazz legend Bleeding Gums Murphy and Sonny Rollins (guest-voicing as himself) appears to ask her not to boycott the record label. The episode's title is a parody of (and reference to) the 1983 film, Risky Business.

The episode starts when Homer is informed by Lisa that Marge is deleting videos from the DCR. Homer enters the living room just in time to save his 2009 Red Carpet Oscars video. Marge then tries to delete the Itchy and Scratchy video, but Bart makes an excuse for Marge to not do so.

In Moe's Tavern, Moe prepared to hang himself because he had nothing to live for. Bart then made a phone call for Moe Ron which is pronounced Moron. Moe trips over the stool in which he stands to attempt the suicide. The other patrons in Moe's Tavern, Homer, Lenny and Carl, heard a noise coming from the storage room and immediately rushed to see what was going on. They notice Moe lying on the floor, not sure if he is dead or alive. Homer attempts CPR, while singing. Moe then woke up and responded. He is then greatful that they cared for Moe. When the gang are back in the bar, Marge arrived and she was displeased at Homer for not doing the shopping when she told Homer two hours earlier. Moe told Marge that he attempted suicide.

Carl, Homer, Lenny, and Marge take Moe to Capitol City to give him a new view on life. While the adults are away, Grandpa is in charge and Bart is in charge of Grandpa. Bart sets up a water slide off of the roof. To keep Lisa from telling on him, he sends Lisa to a jazz club where the greats are playing—including a hologram of her idol, Bleeding Gums Murphy. Lisa writes a letter for a boycott of the record label. The record label attempts to use a hologram of Sonny Rollins to convince her otherwise, but it does not work.

While in Capitol City, Moe gets a new suit and a new outlook. He reopens Moe's Tavern with a hardwood floor and attracts a better class of loser who want something better. Turns out the new clients are venture capitalists who want to sell this whiskey to everyone. Once his suit is destroyed after getting caught in the elevator door of a 98-story building, he loses his confidence. Marge tries to explain to Moe that the suit is not actually magical, however when Moe goes to the Stock Exchange to open his whiskey for trading with his old image, the stock tanks and he goes back to Moe's Tavern being as it was before—except that the experience has still helped Moe's overall outlook, at least for now.

Meanwhile, Grandpa ends up going down the slide Bart created and hurting himself. Bart feels awful and vows to take care of him, and as such hides him in the basement to avoid telling Homer and Marge what he did while they were away. Grandpa and Bart grow closer with this secret, playing pranks on Homer such as adjusting the water temperature while Homer is in the bathroom. Grandpa insists that he needs more care, but Bart eventually discovers that he was faking being hurt to get two weeks of attention from Bart. The pair reconcile and Grandpa says that he liked the attention. Bart says that Grandpa was the first thing he had taken care of for two weeks that didn't die. 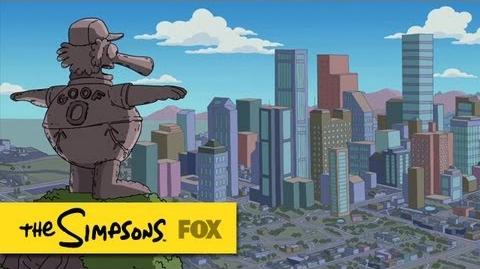 Retrieved from "https://simpsons.fandom.com/wiki/Whiskey_Business?oldid=896848"
Community content is available under CC-BY-SA unless otherwise noted.