Wiggle Puppy is one of Ralph Wiggum's imaginary friends. Ralph says he can fly by wagging his tail, and goes on adventures with him every day. Ralph Wiggum thinks he's a real dog.

Wiggle Puppy has featured in the Simpsons comics several times. A good example is the comic "Chili Chili Bang Bang" when he is Clancy Wiggum's spirit guide.

Midhurst resident Ryan McColl is credited as the creator of the name for Ralph's dog. He also is credited with creating the name of Wiggle Puppy's companion cat, 'Boom Boom Pointy Kitty,' seen in one comic.

In the Ralph Book, Wiggle Puppy "helps" citizens in need, only to hurt them in a manner worse than what was currently inflicted on them. 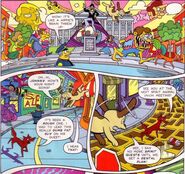 Wiggle Puppy and Clancy Wiggum in the comic "Chili Chili Bang Bang".
Add a photo to this gallery

This article about a Simpsons character is a stub. You can help the Simpsons Wiki by embiggening it.
Retrieved from "https://simpsons.fandom.com/wiki/Wiggle_Puppy?oldid=729988"
Community content is available under CC-BY-SA unless otherwise noted.