Untalented Brothers: Randy, Jermaine, and Tito from he Jackson Five

Wolfgang Amadeus Mozart was an Austrian composer in the 18th century. Marge told a story about him and Bart Simpson played him in her story.

He was a very popular young composer in Vienna, playing sonatas on the grand piano as if he were a rock star. Antonio Salieri was very jealous, especially when he won the best composer award.

At Mozart's next opera, Salieri served the Emperor wine spiked with a sleeping potion. The opera had been a success until the crowd heard the Emperor snoring in the balcony which since the other attendees mindlessly followed the emperor they began sleeping too.

The failure of his opera led to Mozart's fall from popularity, after which he developed a high fever and became deathly ill. At Mozart's deathbed, Salieri told him she had wanted to ruin his life, not kill him. Mozart confessed that he had thought highly of Salieri's work, believing that it would be remembered more than his - but his youthful death ensured he and his music would be immortalized forever. He then died, but not before saying "Eat my pantaloons".

Mozart Bart recently appeared in The Simpsons: Tapped Out during the Time Traveling Toaster 2017 event as a costume for Bart. 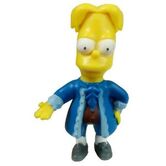 Bart as Mozart figure
Add a photo to this gallery

Retrieved from "https://simpsons.fandom.com/wiki/Wolfgang_Amadeus_Mozart?oldid=830308"
Community content is available under CC-BY-SA unless otherwise noted.