World Headquarters is the Mapple headquarters under the sea where Steve Mobbs lives.

After Lisa received a massive MyBill for $1200, she was completely shocked, but then she realized that she had downloaded 1,212 songs that cost 99 cents each, which explains the large bill. She then traveled to Mapple's undersea headquarters and asked Steve Mobbs for a reduced payment plan for her bill. Mobbs listened sympathetically, but then told her that even though Mapple's posters say "Think Differently," the company's real motto is "No Refunds". He then offered Lisa a job working for Mapple to make good her debt. Lisa is please about the job at first. However, she became a mascot in MyPod costume, handing leaflets to people and telling them to "think differently". 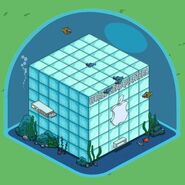 In The Simpsons: Tapped Out.
Add a photo to this gallery
Retrieved from "https://simpsons.fandom.com/wiki/World_Headquarters?oldid=887016"
Community content is available under CC-BY-SA unless otherwise noted.