watch 01:50
Wiki Targeted (Entertainment)
Do you like this video?
Play Sound

"The City of New York vs. Homer Simpson"
The World Trade Center was a complex of seven buildings located in New York City and for a few years the tallest buildings in the world.

Barney Gumble once illegally parked Homer's car at the complex of the twin towers, where it received an enormous number of parking tickets and had one of the front wheels clamped. Homer, with the family, traveled to New York to retrieve the car and stubbornly drove it away with the clamp still on the wheel.[1]

On February 26, 1993, a massive truck bomb detonated in a garage of the North Tower. On September 11, 2001, the towers were destroyed by two Boeing 767 airplanes from American Airlines and United Airlines, named American Airlines Flight 11 and United Airlines Flight 175, hijacked by 10 Al-Qaeda terrorists in the 9/11 terrorist attacks. Despite this, Homer still tried to order a collectible plate from a 1980s TV Guide where the mailing address was One World Trade Center.[2]

Due to the 9/11 attacks, the episodes "The City of New York vs. Homer Simpson" and "New Kids on the Blecch" have the scenes with the twin towers edited out when shown in syndication. 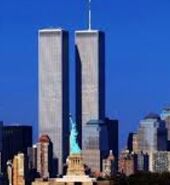 The world trade center in reality before the 9/11 attacks.
Add a photo to this gallery

Retrieved from "https://simpsons.fandom.com/wiki/World_Trade_Center?oldid=907381"
Community content is available under CC-BY-SA unless otherwise noted.