The World of Springfield is a series of Simpsons action figures which ran between January 2000 and September 2004 and was released by Playmates Toys.

The collectable action figure series is called World of Springfield because the goal of the line was to build a miniature Springfield through a series of interactive action figures and play sets. It eventually encompassed over 200 different figures/characters from the series, 40 interactive play sets (toy re-creations of interior settings and town location settings within Springfield), and 3 non-interactive diorama town settings.

The success of all "mass-market" action figure lines based on TV or movie characters are timed to the initial release of the project (as part of its promotional and marketing messages) taking advantage of the promotions, P.R. and advertising awareness and the figures themselves also as advertising and promotional vehicles. Most movie/TV tie-in action figures are successful for the brief period of the theatrical release, the video/DVD release and the possibility of a successful sequel but rarely for any longer period and typically, the release pattern for the action figure is no more than a few dozen figures, and some play sets to serve as background dioramas for the figures, with sales dropping off a few months after the last film is released. The Kenner/Hasbro Star Wars movie line is, of course, the gold standard with figures in the same scale and in the marketplace since 1978. The closest TV equivalent might be the Star Trek line though non-contiguous and not technically from one TV series (coincidentally also from Playmates Toys).

While the Simpsons merchandising and licensing had continued unabated since the series premiere in 1989, when the characters were first represented as action figures, they only had a brief Mattel run in Summer 1990 with only 7 figures (Homer, Marge, Bart, Lisa, Maggie, Nelson Muntz and Bartman) and the Sofa & Boob Tube play set.

Why was the line successful?

Of course, it starts with the mass market appeal of The Simpsons, encompassing everyone from young kids who loved the slapstick aspects to adults of all ages who appreciated that the jokes and situations that worked on multi-levels of our intellect (from the kid in us to the Mensa in us), even teenagers. Like any classic TV series, fans remember and quote the lines, so Playmates Toys managed to capture that appeal with its interactive play sets. Each figure came with its own "coded" chip on the base of that character's foot (generally the foot but not always), so that when contacted with the "trigger" tab on each play set, it would complete the circuit, so by then pressing the button closest to that figure, you would hear a playback of 1-6 phrases for the character.

What made it unique was that the playback was from the actual show and the actual voice actor, so for example, by placing the Homer Simpson figure on an appropriate play set would trigger the playback of an audio clip of a quote as performed by Dan Castellaneta as he performed them in the original episode.

An additional value was that each play set held unique quotes and voice clip performances for a variety of characters, so for example, that placing the Marge Simpson figure or the Bart Simpson figure would trigger different quotes and voice clips per character. One limitation was that not every character worked with every play set, either for story logic reasons (character might not appear at that setting), release logistics (figures released after a play set was available much earlier) or presumably for cost reasons (as each voice clip had to be approved and licensed).

A real-world situation also cannot be over-looked; that these were released during the era of the internet/dot.com boom and general health of the U.S. economy. While the figures were priced at the lower end of action figure retail pricing (from $5.99 USD to eventually $7.99 USD each), the play sets generally ranged from $20 USD to $25 USD at the end of 2004, but there were special releases that ranged into the $60 USD range. Even at minimal retail, 200+ figures and 40 play sets meant a financial commitment. In addition, there were a dozen exclusives and mail-in figures that required extra work to obtain the figures, often via an online auction. It was, however, during these early years of the series coinciding with the healthy economy that added extra impetus and momentum that carried the line a few extra years.

The World of Springfield line set a new standard of company/fan interaction in its relationship between Playmates Toys and the collectors, specifically based at the Simpsons Collector Sector (CS) website and forums. Starting in mid-2001, with contacts from board moderator Michael Crawford, Playmates executives (first Jeff Trojan and later Pat Linden) reached out to the collectors in a mutually beneficial relationship; when fans get input into the line, the company gets free market research. Playmates Toys answered a monthly Q&A from collectors, and regularly gave exclusive details about upcoming products to the CS website directly. Collectors had opportunities to affect the line's future on a few occasions.

The first incident occurred in summer 2001 after a controversy surrounding the release of the ToyFare exclusive Pin Pal Mr. Burns figure. Fans complained about the unfair way ToyFare handled these offers, and Playmates responded; first by having ToyFare make later offers available online, and later by ending WoS offers from ToyFare entirely. Conversely, fan enthusiasm helped revive products that had been cancelled at one point, including the deluxe Main Street play set with the Old Jewish Man and Jeremy Freedman, and the Moe's Tavern play set with Duffman.

Collectors were also often asked to give suggestions on what figures and play sets they wanted to see, and polls were generated. The results of these polls had an impact on future lineups, with collectors getting many of the figures they had requested.

This interaction hit a peak in 2003 when the Simpsons Collector Sector hosted a panel discussion at the San Diego Comic Con that July. A representative from Playmates Toys was the featured guest and engaged in Q&A with attendees and handed out free figures to all of the attendees as well.

Fans continued to have a voice through the end of the line, although larger issues (voice contracts, censor disagreements, etc) sometimes prevented collectors from getting everything they wanted from the line. This model of interaction has been followed by many other toy companies since.

The line ended in September 2004 after the Springfield Town Square with Jebediah Springfield play set was released due to a number of factors, most importantly slow sales. There were a number of factors, in turn, that contributed to the declining sales, including "collectors fatigue", the release pattern of figures, the sheer size of the line being difficult for newcomers, the slowing economy, the changing toy retail situation, and even Playmates Toys relationship with 20th Century Fox.

For a complete detailed history of the WoS line, check out Michael Crawford's 'It's a Mad, Mad, Mad, Mad World of Springfield!' and the archives at the Simpsons Collector Sector for an even more in-depth history.

However, shortly after the end of WoS, McFarlane Toys, known for their sports line of action figures, decided to revive Simpsons collecting and start a new line of figures. The first set to be released was the "Ironic Punishment" set based on "The Devil and Homer Simpson" segment of Treehouse of Horror IV featuring Homer being "tortured" by one of the devil's minions by forcing all of the donuts in the world down his throat. It was soon followed by a "Family Couch Gag" set based on the couch gag. So far, the new line has been accepted very well by Simpsons collectors and plans for an official line of figures will be coming soon. 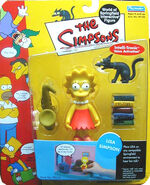 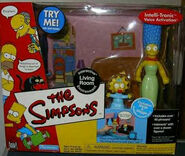 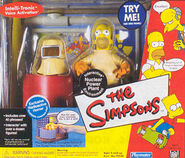 Release date: July 2001 (Note: This is the only series to not release a playset.)

Technically not part of World of Springfield (although there is a debate among the fans), these vehicles were made by Playmates Toys in June 2001 and August 2002, and are sometimes considered part of the line by fans. The vehicles weren't actually able to hold any figures from the line, but they could, however, speak by moving the small characters to the right or the left or by pressing the car's hood (this would create a conversation between the characters rather than just one character talking). Upon doing so, each character would have special lines taken from episodes from the series, much like the figures.

Again, technically not considered part of the World of Springfield line (although there is debate about that among collectors), Playmates Toys released a series of figures exclusive to Kay Bee Toys based on the "When Bongos Collide" story line from Bongo Comics in August 2002. It featured Simpsons characters transformed into superheroes. The initial three-pack of figures included Homer Simpson as the Ingestible Bulk, Apu Nahasapeemapetilon as Captain Kwik, and Edna Krabappel as Vampiredna. Two more three-packs were planned (featuring Marge as the Entangler, Lisa as the Jazzler, Maggie as BrainBaby, Grampa as Oldblood member Coma, Skinner as The Stickler and Willie as the Plaid Piper), but the line was cancelled as soon as it hit retail.

Like in most toy lines, items are planned for release that for a number of reasons (cost issues, low retailer interest, etc) never end up being produced and/or released. Many items were cancelled from the World of Springfield line; a complete list is available in the Simpsons Collector Sector's Release Guide. 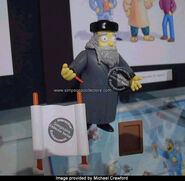 Retrieved from "https://simpsons.fandom.com/wiki/World_of_Springfield?oldid=881803"
Community content is available under CC-BY-SA unless otherwise noted.