The Land of Chocolate

Ye Olde Chocolate Shoppe is a shop that sells chocolate.

Homer's new employers are not happy with his work performance, so they call him into their office to have a discussion. They ask him if he has any good ideas for the future, and Homer says he wishes that the candy machine won't take beaten up dollar bills. Horst understands, and tells Homer that he and Fritz are from "The Land of Chocolate" (which is Germany). Homer then starts to imagine himself in this fantasy.

Near the end, Homer rushes to the Ye Olde Chocolate Shop, where he is admired that the chocolate there is on sale for half price.

This store later appeared in The Simpsons Game in the first level, and when Homer admires the half price chocolates here, instead of ending the dream, he meets a white chocolate rabbit that wants Homer's help to not eat their entire world. 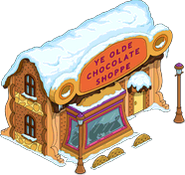 Add a photo to this gallery
Retrieved from "https://simpsons.fandom.com/wiki/Ye_Olde_Chocolate_Shoppe?oldid=761249"
Community content is available under CC-BY-SA unless otherwise noted.