I will stop asking when Santa goes to the bathroom

Kang and Kodos are flying in an UFO laughing.

The Simpsons are flailing tube man balloons on a used couch lot. Balloon Bart steals a pair of scissors and cuts Balloon Homer, who flies into some power lines.

Yellow Subterfuge is the seventh episode of Season 25.

Principal Skinner promises that the most well behaved student will get to ride in a submarine, so Bart tries to be a model student, but when he screws up and is not allowed on, he and Homer get back at him. Krusty is strapped for cash, so Lisa helps him out by suggesting he sells foreign rights to his show.

The story begins with Principal Skinner dreaming about him having law and order in the wild west. Superintendant Chalmers wakes him up afterwards and reminds him that he's on. He tells the students of Springfield Elementary about an exciting field trip where they get to go on a submarine, but not everyone can go as there are limited places. He states that only the well behaved kids will be able to go and the kids who get crossed off will not go. Bart takes this into account and flies his remote control plane with a bee hive that was hovering over Skinner back to where the hive was to drop it off.

Bart is very excited about the submarine trip despite Marge reminding him he might not go because of his behavior. But Bart disagrees with her and everyone else and insists that he'll be going anyway if he becomes a good kid. Bart gets rid of all of items that could get him in trouble including his whoopee cushions which he buries in the backyard, Homer walks in that area of "whoopee cushions" until Bart says it wasn't where he buried them.

Lisa is riding on her bike until she sees Krusty having all of his possessions being taken from him due to him being broke. Lisa advises for Krusty to sell foreign rights to his show by having his show broadcasted in different countries.

Meanwhile, Principal Skinner starts crossing people off the list after terrible behavior. First Wendell for dropping gum from his mouth onto the floor, Jimbo for aiming a meatball at E-mail, Dolph for his lips touching the water fountain, Database for not having a handkerchief and Lisa but she was the only one to request being taken off due to the use of power Skinner is using. Bart tries to impress Skinner by wearing his formal blue suit and cleaning his knees. Skinner seems impressed by him.

Later, Bart is getting tired of not pranking anyone and getting A+s which he states as "Strange Red Marks". The School bus breaks down before it could get to school. Bart becomes panicked and escapes the bus and tries to run on foot to get to school on time. Bart tries to get a taxi but Milhouse beats him to it, forcing him to run to school after jumping over construction signs that fell out of Oscars Obstacles. By the time Bart gets there, the bus has beaten him but he manages to get to school on time anyway, only to be crossed off the list for leaving muddy footprints on the school floor. Bart doesn't give up trying to get his name back. He tries to persuade him to put him back using "President Obama" which fails due to a distracting bird. He makes up for it by washing Skinner's car and hopes to go on the trip. However, instead of taking him on the submarine, Skinner ends up betraying Bart by leaving him out of the trip, disappointing him deeply. As Skinner closes the hatch with an evil smile on his face the well behaved students cheer in delight including Nelson, Milhouse and Ralph.

At sunset Bart is still really glum as Homer arrives on the pier. Homer tries to make Bart feel better by saying the submarine was probably not that fun anyway. As Milhouse fires the torpedo which brings down a lighthouse, Bart asks Homer for some advice to get revenge on Skinner, Homer plans to do a prank on him. The next day, Skinner goes about his daily routine until he discovers his mother has been stabbed in the back. Homer and Bart come to his house to "investigate" as Skinner believes he was the murderer. Homer suggests Skinner should start his new life in his new identity "Dick Fiddler". Later Homer and Bart dispose of Skinner by hiding him in a potato sac and taking him to a Budget Dog vehicle. This is unsuccessful as Skinner is sitting on one of the Simpsons' couches when Homer and Bart come back. Marge comes in and tells Homer and Bart off the pranks gone on long enough that they need to apologize for once. Skinner's mother arrives and mentions why she was in the prank which makes Skinner feel even worse now that she is alive. This serves to infuriate Marge more, despite Homers attempt to seduce her into calming down. After overhearing what he had mentioned about being glad she died, Agnes pays him back by telling him that she has tossed out the pills that made her nice and will be much meaner to him. With Seymour becoming more miserable, Bart and Homer got their revenge on him. Yet out of spite, Marge decides to give them a piece of her mind and they are presumably punished by her.

Meanwhile, the "Krustys" from different countries train to be like Krusty and end up being pretty big. Krusty thanks Lisa for helping him out. Krusty discovers that the other Krustys are more popular than him. So he gathers them up in Florida to tell them that they will not earn as much as Krusty. Krusty is then being chased by the other Krustys. His supervisor asks him why he became a clown, Krusty responds and says he was meant to be one of the sad ones.

In the UK, the Itchem and Scratchem Blow was edited out, due to it being aired before the watershed because of Itchem setting fire to Scratchem's hair then rolling him up into a beach towel and being smoked like a marijuana joint. 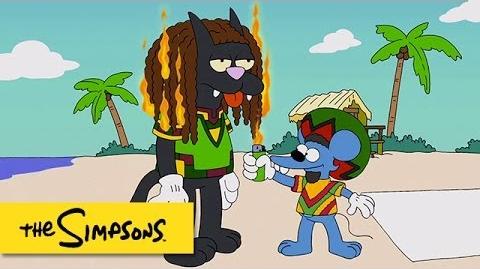 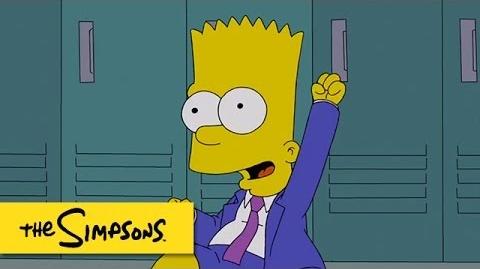 Promo for "Yellow Subterfuge" THE SIMPSONS ANIMATION on FOX 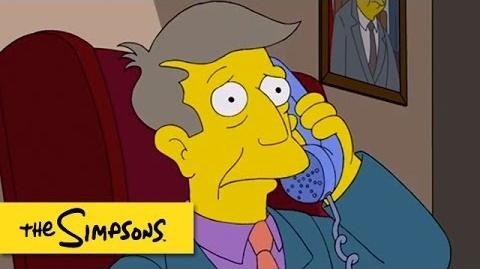 Retrieved from "https://simpsons.fandom.com/wiki/Yellow_Subterfuge?oldid=911474"
Community content is available under CC-BY-SA unless otherwise noted.