Nancy Cartwright (currently)
Susan Blu (formerly)
Yellow Weasel is one of two cronies of Nelson, along with the Black Weasel. They are the youngest of the bullies at Springfield Elementary School. They are almost identical looking except their skin colors are different. They only occasionally hang out with Nelson after he was defeated by Bart. While only continuing to serve Nelson on very rare instances, the Weasels still appear frequently throughout the series in scenes involving the other bullies and primarily in scenes involving the other children of Springfield. The Yellow Weasel wears a red T-shirt, tan shorts, and red shoes.

He is an online friend of Taffy's. Considering his reputation as a school bully, it is unknown as to how he managed to come to this status.

At the school dance

Yellow Weasel next to Black Weasel

Getting into a fight with Bart

With Black Weasel and Bart

Getting punched by Nelson 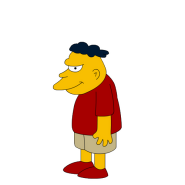 Retrieved from "https://simpsons.fandom.com/wiki/Yellow_Weasel?oldid=953826"
Community content is available under CC-BY-SA unless otherwise noted.