Zia Eliza Simpson is the future daughter of Lisa and her husband, Milhouse, in "Holidays of Future Passed". She is 13-14 years old.

Zia looks near identical to her mother, Lisa, due to apparently only having her genes. Zia's hair is similar to Lisa's, except it is rounded instead of pointed, and she has a longer lock of blue hair, which may have come from Milhouse's genes, although due to apparently not having any of his genetic material it could have been inherited from her maternal grandmother, Marge, or she dyed it. She has a changing blue tattoo on her left arm, one of which is the Taoist symbol the Yin Yang, a peace sign, and a biohazard sign.

She wears a purple crop top, a magenta skirt with a dark grey belt and purple straps on the side, dark magenta boots with magenta soles and straps, and a magenta bracelet on her left arm.

Lisa became pregnant with Zia in 2027, as seen in the montage of family Christmas photos, and the next year, in 2028, Lisa and Milhouse are seen with an infant Zia. So Zia was born in either late 2027 or 2028, making her either 13 or 14 years old as of December 2041, in which "Holidays of Future Passed" takes place in. She is then shown in Lisa's family Christmas photo for 2041, sitting with her parents on their couch with her headphones in, looking bored.

According to Milhouse, the genetic engineering technology allows Zia to have all the good features, thus containing none of his genes. This seems like a joke, given that she is quite different from Lisa, and the definition of the parent-child relationship make the two share 1/2 the same genes.

Zia spends much of her time plugged into the Ultranet, and in doing so somewhat annoys and worries her mother. When she is not plugged in, she is shown to be sarcastic and arrogant around Lisa, shooting down her mother's attempt to connect with her. Her rebellious nature leads Lisa to think that Zia doesn't respect her, stating that Zia thinks she's a "ruthless tyrant", and questioning how it was her daughter that turned her brother, where ironically she acted no different as a child towards Marge, her own mother.

Lisa brings Zia with her to her parent's home for Christmas while Milhouse nurses his seasonal allergies, but Zia plugs herself into the internet for almost the entire time.

Worried, Lisa enters the Ultranet to check up on Zia despite her own feelings and Marge's advice to just leave her alone.

Lisa finds Zia's Ultranet Room to be filled with things dealing with science and other studies, and there are posters in her wall of women such as Joan of Arc, Marie Curie, and Lisa herself.

Zia appears from chemicals out of a beaker, after questioning what Lisa is doing there. Lisa tells Zia, who defensively asks if she assumed she was doing shady things, that she's sorry for invading her privacy, and that she only did it out of concern, but she's glad because she learned that her daughter looks up to her. Zia replies that she looks up to both of her parents, but she especially looks up to her mother, and they both hug. As they do this, a door to another room, a dance club, opens slightly behind them. Zia quickly closes the door before her mom notices.

Zia appears with the rest of her family at the end of the episode, at the Simpson's house on Christmas Day. After Maggie arrives home with her baby girl, Zia and everyone else gather around for a Christmas photo

A photograph of Zia, Lisa, and Homer can be briefly seen in The Simpson family's living room in "Days of Future Future". Besides that, Zia does not appear nor is even mentioned in the aforementioned episode.

Lisa is pregnant with Zia

Zia as a baby

Zia as a teen

Zia hooked on the Ultranet.

Lisa questioning how her daughter end up like her uncle.

Zia hooked on the Ultranet with her mother.

Lisa Simpson looking at Zia's door on the Ultranet.

Zia glaring at her mother.

Zia smiling at her mother.

Zia looking happily at her aunt, Maggie and her daughter.

Zia with her family. 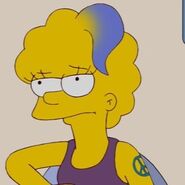 Zia talking to her mom, Lisa. 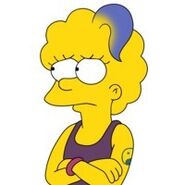 Zia making up with her mom, Lisa.